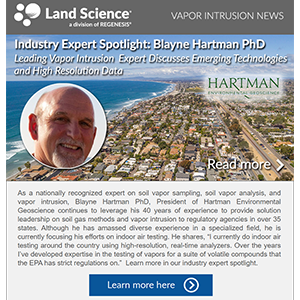 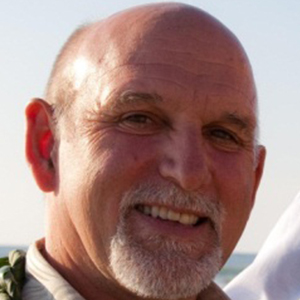 As a nationally recognized expert on soil vapor sampling, soil vapor analysis, and vapor intrusion, Blayne Hartman, Ph.D. and President of Hartman Environmental Geoscience, a valued Land Science® client, continues to leverage his nearly 40 years of experience to provide solution leadership on soil gas methods and vapor intrusion to regulatory agencies in over 35 states, and counting. Prior to forming Hartman Environmental Geoscience nearly 10 years ago, he specialized in training County and State regulatory agencies across the U.S., and many of the USEPA regions, the U.S. Department of Defense, and numerous stakeholder groups and consultants.  Although he has amassed diverse experience in a specialized field, he is currently focusing his efforts on indoor air testing. He shares, “I currently do indoor air testing around the country using high-resolution, real-time analyzers.  Over the years I’ve developed expertise in the testing of vapors for a suite of volatile compounds that the EPA has strict regulations on.” To prepare for a career centered around making an impact on our earth’s environment, Hartman earned his Ph.D. in Geology, Geochemistry, and Oceanography from the University of Southern California, (USC) and preceded that with a Masters in Earth Sciences, also from USC. He began his university studies at Clarkson University, in Potsdam, New York, where he received a B.S. in Chemical Engineering, after developing an interest in earth sciences while in high school. He continues, “Early on I went to work for Union Oil Company in Brea, CA.  Based upon my background, they assigned me to the dissolved ocean seepage project, which they were looking into at the time.  I saw an opportunity to offer this service to other oil companies, so I opened my own business in 1988 offering this service and other ocean-related services, such as coring.  Oceanography was a tough and risky business back then, so I decided to move into the environmental business in 1990, offering on-site analysis.”

To stay abreast of new industry trends and emerging technology, Hartman teaches continuing education courses around the country and in several countries. This year his instruction included a course titled, Vapor Intrusion Pathway, in conjunction with Argonne National Laboratory in Chicago at Argonne’s Conference Center. The course covered the latest regulatory updates (State & Federal), provided a review and updates on assessment and mitigation methods, and provided a refresher on key topics relating to the VI risk pathway. When asked how he’s seen the industry change over the years, he points to the advancements made in data resolution and real-time data delivery. He shares, “The biggest change I’ve seen in the industry is the embrace of high-resolution data and real-time data telemetry.  20 to 30 years ago we would collect soil samples at 5-foot depth intervals at pre-determined locations on a site, send them to a lab, wait a week or two for results and then figure out what to do next.  Now, we are collecting continuous data through the soil column, getting real-time results and beaming the data to a person’s desk enabling real-time decisions on what to do next while the crews are still in the field. The same is true with indoor air sampling. Rather than collect a few discrete samples and sending to a lab, we are analyzing continuously with automated instruments and sending the data to the web in real-time.”

When it comes to working with Land Science®, Hartman appreciates and enjoys the level of interfacing he receives, which has led to building strong relationships. “Although I really don’t work with Land Science® directly,” he says, “I do get involved with the executive team.  I’ve had a relationship with Land Science® for over 10 years now and I know all their principals. The biggest mutual benefit we both receive from the relationship is exposure. They have a strong marketing presence and client database that I do not have, and I have a reputation in the vapor “world” that brings exposure to them.” When asked what he enjoys most about his work, he points to the satisfaction he receives from assisting clients in overcoming significant challenges. He shares, “Helping people out of predicaments can be very satisfying.  In the environmental business, we are generally more like grim reapers than heroes.  I often say to my clients, ‘Hopefully you won’t see me again.’  So, it’s very rewarding when I get a client out of a jam quickly and inexpensively.”

Married and residing in Solana Beach, CA, Hartman has two children and one stepdaughter. His son works with him and has steadily gained experience. He continues, “He has become my field chemist. In 2019 alone, he has completed field jobs in Belgium, Boston, Vermont, Seattle, Portland, OR, Indianapolis, Michigan, and numerous jobs all around CA.  I couldn’t handle this by myself, and I’m now getting him involved in the business development side of things.” Outside of his work, Hartman enjoys various outdoor activities, and he’s been playing handball for over 40 years. “I do all kinds of things outdoors,” he says, “I’ve waterskied the Colorado River, am a small plane pilot, enjoy snow skiing and backpacking, and have also river-rafted the Grand Canyon twice. As you can probably sense, I love being outdoors, and my earth sciences background translates into wanting to be outside, since the outdoors is the laboratory for geologists and oceanographers.” And what does he see the future holds in environmental assessment? He concludes, “The future will bring more real-time, higher resolution analysis streamed to the internet for rapid decision-making. Like everything in life, real-time information is the present and the future.  Just look at people on their cell phones- constantly engaged, accessing real-time information.  The same is happening in the environmental field.  More data enables better understanding of the situation, and real-time data enables faster decisions, which in turn, saves time and expense.”

Land Science® is proud to have Blayne Hartman, President of Hartman Environmental Geoscience, as a valued client and partner in environmental assessment, and appreciates his highly specialized experience and knowledge base in providing successful outcomes for Land Science® and its clients.