Brownfields are a big concern in the U.S. due to the environmental, economic, and political issues they represent. A Brownfield site is a property whose sale or reuse is prevented due to the presence of contaminants or pollutants. While these properties often pose liabilities for the communities they are a part of, they also represent business opportunities for environmental consulting firms and can be a springboard for community redevelopment and economic revitalization because of the EPA’s Brownfields Program.

The US EPA is behind many of the developments concerning Brownfield sites. This US EPA provides grants and technical assistance to communities to assess, safely clean up, and sustainably reuse contaminated properties. The grants make way for ensuring clean air, water, and land preservation and restoration.

A study done in 2015 proves the economic value of cleaning Brownfield properties outlining the benefits to communities and citing positive outcomes like residential property value increasing by up to 15% within 1.5 miles from the affected site. Every year the US EPA assesses its accomplishments among the nation’s communities. The most recent and comprehensive results as of May 1st, 2017 include: 26,722 properties assessed nationwide, 124,760 jobs leveraged from the results, $23.950 BN dollars leveraged, and 67,419 acres anticipated to be ready for use again. These numbers are promising in the developments at Brownfield sites. In Pennsylvania for example, the state received $1.8 million in funding to examine Brownfields. This enacted local organizations to take on many new projects while making significant progress in impacting contaminated sites.

While the benefits of the EPA Brownfields program are clear, challenges remain for property developers and environmental professionals who are tasked with cleaning up and remediating these sites before they are cleared by regulators for re-use. Perhaps most notably, vapor intrusion from soil and groundwater contaminants is often a problem that must be mitigated. As risk standards and other compliance issues associated with contaminant vapor intrusion continually evolve, engineered controls like those offered by Land Science provide a practical, cost-effective solution to eliminate risks. 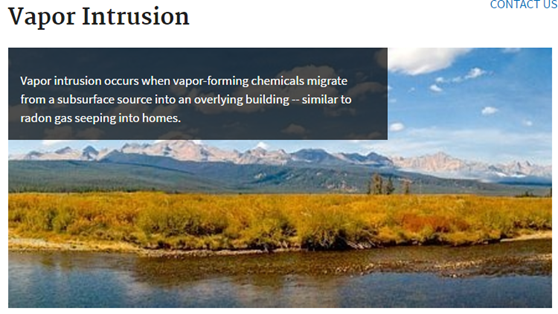 Vapor intrusion (VI) is a relatively new concept in the environmental industry first recognized in the 1980’s. It was discovered that contaminants in the soil and groundwater could be the cause behind poor indoor air quality through the movement of vapors coming up through the ground or slab.

Vapor Intrusion is defined as a process by which chemicals in the soil or groundwater migrate to indoor air above a contaminated site. These chemicals are often known as Volatile Organic Compounds or VOCs. Vapors typically enter a living space through pathways underground in a building’s foundation. These active vapors can pass through cracks in the wall, gaps from utility lines, or even through concrete which is naturally porous.

In extreme cases, the vapors may put humans at risk. If inhaled, those affected could encounter minor health concerns and even long-term effects. The issue of safety is always a concern, since in addition to inhalation of VOCs, these vapors can also become flammable. The degree of the vapors’ impact on human health involves factors that include its chemical concentration, ventilation, and the building’s occupancy.

The US Environmental Protection Agency (US EPA) has put in place measures to manage and eliminate vapor intrusion risks. The Comprehensive Environmental Response, Compensation, and Liability Act (CERCLA) was implemented nationwide and provides a Federal “Superfund” to clean up abandoned sites with pollutants and contaminants. If not administered by a private party, the EPA takes control and mitigates vapor intrusion.

To regulate VI, the EPA has set standards for acceptable indoor air quality levels. Upon determining exposure and risk, there are a variety of mitigation methods to lessen the vapor effects and disturbances. At Land Science, we responded to a need in the industry with an effective and proven solution: an easily installable, effective barrier system to protect against chemicals like PCE, TCE, and Benzene.

Vapor intrusion mitigation may be a newer advancement in environmental technology today, but the Land Science team is staffed with experts from the environmental industry trained and knowledgeable in understanding and providing the highest level of protection to help improve air quality in new and existing structures. As leaders in the field, we are proud to provide the most innovative, groundbreaking, and cost-effective vapor intrusion barrier systems to reduce risk and liability while protecting your clients and their properties from VI exposure. Search our website to find out more.